Wow, over a year! So much has happened that I can’t even begin to completely re-hash, and frankly, most of it doesn’t even merit rehashing at this point. The short version is that I’ve celebrated both a work anniversary and another birthday, I’ve found some amazing peace, and I’m generally successful in not letting negativity rule my life. I work with a great group of folks, most of whom I enjoy immensely, and who respect and accept me for who I am.
I’ve managed to successfully let go of some anger that has been simmering, admittedly, largely because those with whom I was angry have gotten fabulous bitch-slaps courtesy of Karma.  This is awesome because I’m reasonably likely to run into at least one of them at some point, and I no longer feel the need to introduce my fist to their teeth, which will, at least, avoid an assault charge.
My blood pressure is back down to normal, without medication, and, aside from an occasional flare, the fibro is well controlled.  Weight is still largely the same, mostly because I make lazy, less-than-ideal food choices more times a week than I should.
I’ve had an actual vacation for the first time in too damned long, and I’ve used up all but about 3 of my 10 vacation days for the year, which is fine, because I get 10 more starting in January. On the schedule for next summer is a trip to Quebec, if everything can get sorted out properly.
The drawback I’ve found to my decision to find positivity in every day, and minimize negativity, is that I get frustrated by people who have not made such choices, and always have something negative to say, are whiney, and just plain annoying. I’ve had to adjust my facebook settings so that they don’t show up in my feed and drive me crazy! I’m fully aware of the fact that it hasn’t been that long since I had long stretches of pity party, and I try to be patient, but it does wear on my nerves.
Overall, I’d have to say that I’m happier and more content with myself and my life than I’ve ever been. I have stopped competing with anyone, including my younger self. I conform to anyone else’s standards only so far as is necessary to meet the company dress code (jeans and a company shirt).  I wasted too many years trying to conform to someone else’s standard, which made me self-conscious and led to always questioning how I looked.  I’m truly comfortable in my own skin, finally. There have long been people in my life that I love unconditionally, but until the past few months, I was not one of those people.
My most awesome happy thought for today is that as of a few  days ago, some of my dearest friends have finally managed to close a terrible chapter in their lives, which will enable them to move forward and leave the past behind them.
Posted by Raevyn at 9:31 PM No comments:


Tomorrow is the first day of the rest of my life, and I’m working on making it a healthier life, come hell or high water. This afternoon I used my favorite cooking utensil, the crock pot.
I found this recipe on Facebook
Crockpot Balsamic Chicken -


Directions:
Combine the first four dry spices in a small bowl and spread over chicken on both sides. Set aside. Pour olive oil and garlic on the bottom of the crock pot. Place chicken on top. Pour balsamic vinegar over the chicken. Cover and cook on high for 4 hours. .

It was delicious, and we had it with some green peas and mashed potatoes. Tomorrow’s lunch will be 4 oz of chicken, about 7 oz of salad, topped with a tablespoon of homemade Balsamic Bleu Cheese vinaigrette dressing, and a side of brown rice & quinoa. I’m DEFINITELY adding this recipe to my repertoire, since it is delicious, in addition to low fat, low sodium, and good for me!

I’ve also made protein shakes with some fruit pureed into them for breakfasts, and stored them in baggies in the freezer, so I can take them out the night before to thaw enough to drink on the way to work.
Short term goal is 5 lbs by the 19th, and a total of 10 lbs by my birthday on October 5th. If I can meet a goal of 10 lbs a month, then by the time I take my next trip out of town, for DoTS in December, I will have exceeded my doctor’s goal for me. Maintaining that pace, by Opening Weekend of Scarborough, I will be within 25 lbs of my high school graduation weight, which would be fabulous.
My current pant size is somewhere between a 24 & a 26, depending on the pants and the maker. Shirts I’m doing a 3xl or a 22/24. By my birthday, I’d love to be down to a 24 or less in pants (because, let’s face it, my ass is a bigger problem than my upper body). By DoTS, I’d like to be down to a 2x or an 18/20 shirt as well.
Happy Jar for the day: I’m blessed with an awesome chosen family and household, even at the times that they drive me up a wall.
Posted by Raevyn at 9:39 PM No comments:


The initial report from the doctor is in, I officially have high blood pressure. It’s not terribly high, but regularly high enough to cause some concern and land me on lisinopril. I’ll have my first dose tomorrow morning (after I get to work, since it’s known to cause drowsiness, light-headedness, etc., so I’d rather be where I’m not going to be driving before I take it). I also have instructions to exercise more and lose 10% of my body weight. When I’m in the doc’s office next week for a follow up, we’re going to discuss this situation further, because, well, I’m home for somewhere between 3 & 4 hours on weeknights before I need to go to bed, and somewhere in there must be my dinner.  I’ve learned from the past, that late evening exercise and restful sleep are NOT friends in my world. Once it cools off, I can walk a lap or two around the exterior of our building at lunch, but for now, while it’s Hotter Than Satan’s AssHole out there, it is NOT an option. I’m looking into gym facility options that are either near work, or somewhere between home and work that’s easily accessible one direction or the other. There’s a facility associated with a hospital that’s open to the public, and includes an Arthritis Aqua-cise program, which should also be beneficial for the Fibromyalgia as well. My short term goal (by the time I go to the doc’s again on the 19th) is about 4 lbs, so I’ve gotten some salad mix, and will be working on eating more balanced, healthier stuff, regardless of what the rest of the house is eating.
Happy Jar for the day was making someone I adore laugh til she almost wet herself, when she’d had a bit of a rough 24 hours or so!
Posted by Raevyn at 9:19 PM No comments:


So today I had the Great Boobie Smash done. Yep, I had my first mammogram. At age 45. To be completely honest, I was prepared for a horrible torture device, in a freezing room, with my girls each smashed repeatedly between icy plates, and squashed to flat as pancakes. I have to say that was totally NOT my experience. The tech was a lovely young woman, who explained to me exactly what she was doing, and took the time to explain to me that since I had no previous scan, it’s quite possible that they might need a second scan, just to verify what they saw, especially given the obvious density of my girls. Now, I have no direct history of breast cancer in my family, which is part of the reason I’ve not worried about getting a mammogram sooner. Also there was the cost… I now have AWESOME insurance that pays 100% of my mammogram, with no co-pay on my part.
At any rate, the rooms (both the changing room and the actual radiology room) were comfortable temperatures, and the fact of the matter is that the only painful part was after each one was finished, when I could back up, only to discover that my underside was stuck to the bottom plate… think peeling your leg off the leather seat in the car in the summer, only your boob. Yeah, THAT was fun. It happened the first time, and like a dork, I thought it was an anomaly so I didn’t bother to lift the other before I started pulling back the second time around.
Results should be to my doctor by Monday, and I should have my copy by sometime next week. Now I just have to wait and see what the report says…
Happy Jar for the day is the fact that I have a stable, albeit chaotic home, my own space for quiet time, and all the purrs and kitty love I can stand on any given day!
Posted by Raevyn at 9:08 PM No comments: 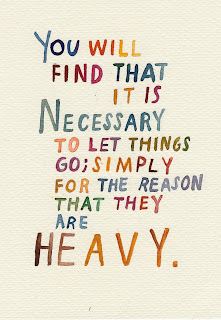 This has been a hard lesson for me to learn, because, well, I hold on. I hold on to things, I hold on to people, I hold on to grudges. A lot has happened over the past few months, good things, and bad things. Our household is still very full, and probably a little livelier than many, but we’re making it work, I think. I’ve found a position with a stable company that values its employees, and I no longer dread getting out of bed in the morning to go to the office. I could live without the drive (about an hour each direction), but working with people I like and respect, and that like and respect me as well makes the drive worth every minute.
I’m not perfect, far from it, actually, but over the past few months, I’ve found more patience than I ever thought I might have, and I love where I am in the world these days. I am so tremendously blessed by family, both genetic and chosen/adopted. Since I’ve learned to truly let go of things that have been weighing me down for all of my adult life, and if I’m completely honest with myself, much of my youth and childhood, I’ve found a wonderful freedom, from anger, from resentment, and from sadness.
I’ve made a conscious choice to not allow negativity to rule my life, drag me down, or control me. One day at a time is all anyone can expect of me, and it’s all I’m committing to. To that end, I’ve started the school kids in the house on their own happy jars. Each day, they each get a colorful card of paper, on which they can write something happy or good that happened that day. My goal with this for them is to help keep them focused on the positive, and to give them something tangible for those rotten days we all have occasionally, that they can look at and say “sure, this has been a bad day, but look at my happy jar, I AM blessed, even today”.

Today’s Happy Jar entry for me is that we had a birthday party for a beloved part of the village, and had all but 4 of our village with us to enjoy a delicious meal, great fellowship, and some good family time.
Posted by Raevyn at 9:10 PM No comments:

Courtesy of Photography on the Run

Raevyn
D/FW, Texas, United States
I'm a strong, friendly woman. Sometimes a little crazy, sometimes a little random. I have a job I enjoy, and I've learned several difficult lessons over the past couple of years. Ultimately it's made me a stronger and better person.